As the ship came into view as I crossed the bridge in Barcelona, my first impression was how large she was. But in all fairness the check-in process was really quick and easy, and within 20 minutes of arriving at the port I was stepping on board.

What an impressive ship, as you enter in the main ‘Piazza’ with its stretch of shops, restaurants and bars, and the balcony and an unbelievable domed video screen stretching the whole length of the Piazza. In the coming nights we would be treated to a different show each evening on the screen, from whisking us off into space, a visit to Jurassic Park, even a night of ‘Selfies’ where everyone’s faces appeared on the roof!

I had a balcony cabin, which was very comfortable, with a double bed, sofa, wardrobe Interactive TV, and a shower room with toilet. The bed was really comfortable, and it was kept very clean. If I did have any criticism, is that if I was going away for longer than a week with a partner, the storage was a bit small.

The main restaurants are all at the back of the ship, and it operates a 3 service evening meal choice of 5.30pm, 7.30pm or 9.30pm, there is also the buffet which is open 20 hours a day! And I have been told they offer the best pizzas at sea!

There is also a choice of Speciality restaurants, including the ‘Butchers Cut’ steak house, which I personally found wonderful, with one of the best steaks I have ever had. I also tried the Teppanyaki, Japanese show restaurant, which once again was excellent, with a lot of choice, and a lot of fun along the way too.

The cruise was very port intensive with all but one day in a different port, giving cruisers the opportunity to really discover a lot of Europe, in not a lot of time. MSC Cruises do also have a few ports of embarkation, with us, apart from Barcelona, we also took on passengers in Marseilles, Genoa and Civitavecchia (Rome), which, with a ship this size helps with the checking in, as it’s not the whole ship that’s getting on and off in the same day.

I also personally love port days where you don’t get off the ship, you virtually have the place to yourself! The MSC Meraviglia also has a big indoor swimming pool, along with hot tubs, and an outside pool, as well as a children’s splash park and waterpark with slides at the rear of the ship. There is also a ‘Ropes works’ adventure area.

On Deck 16 there is an indoor sports area where they organise all sorts of things, like 5-a-side games, and shooting the hoops! There is a 4D Cinema, also 2 F1 simulators, ten pin bowling and a whole host of other fun things to do.

Some of the bars are great places to relax and watch the world go by. The Sky Lounge on deck 18 had great views of top deck and out to sea, and was one of those places you can just sit back and relax in. The other bar I really enjoyed was ‘The Brass Anchor’ pub, which is the most authentic British pub I have ever been to on a ship. The staff where friendly, and they had specials all the time, like ‘Curry & a pint’ for 8 euros on a Monday night!

The shows in the main theatre where very ‘International’ with singers, acrobats and magicians. But there was also the Cinque du Soile on board which everyone was raving about. But also of an evening they had live impromptu parties in the Piazza, Like a ‘70’s’ show, where the cast of the Village People (not The Cruise Village!! 😂) all turned up, and everyone was singing and dancing, with a real fun atmosphere.

The ship is big, and there are lots of places to go, but what I found was most people found their favourite place, and went there most nights, so although the ship was big, the staff did get to know you, so it did have a more intimate feel.

The one thing that I did really notice too was the wide age range on board, from youngsters, teenagers, mid 20’s and then upwards, it was a real mix, and proving that once you have tried a cruise, at no matter what age, you will normally be back for more.

Would I go back on the MSC Meraviglia? You bet ! 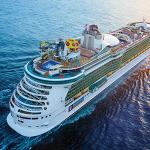