Cruise specialist, Jennifer Jones, was invited by Hurtigruten to join them for 4 nights and experience just a few of the highlights you could have for yourself on one of their Coastal Voyages.

Hurtigruten  – Nordic translation means fast service.
Hurtigruten was set up in 1893 to link the many coastal ports of North Norway with a service to transport goods and post on a regular basis during summer and winter.  It is still a major lifeline for the inhabitants of these areas, delivering fresh produce and transporting export goods to the rest of Europe and the World.

Our voyage was to begin at Tromso, so our trip started with flights from London Gatwick with Norwegian Air via Oslo. I’ve never flown with them before, and it was really great onboard service, plus they have good timings and offer a generous 2 bag allowance – perfect for packing all those warm clothes!
As soon as Norway came into sight, we knew we were going somewhere special, clean and bright – the views from the plane were incredible.
Getting from the airport to the ship – public transport takes you to the town centre in Tromso, it runs regularly and is included with the package price.

Our home for the next 3 nights was the Nordnorge – built in 1997, but had a full refurbishment in 2016 – which holds around 600 passengers at full capacity. We were welcomed by the crew of the ship and everyone was made to feel at home straight away.
We were allocated an outside cabin with picture window. The cabins are basic, in the twin bed configuration (the second bed converts to a sofa during the day) and the bathroom is small. However, this isn’t a standard cruise ship with all the whistles and bells; it’s a coastal voyage ship, and you’re here for the wonder happening outside, rather than the decor of your cabin. I would, however, recommend an upgrade to the Arctic Superior cabins – they are a little bigger and have more storage space.
The public areas are well decorated (lots of mahogany and brass rails), and perfectly clean throughout.
The restaurant is all open seating, offering tables for 2-8. Most meals are 3-course, served by the lovely staff, but one or two meals maybe an open buffet. The main basis of the menu is fish of course – smoked herring, cod, pollock, carp – but if you’re not keen on fish, then I can recommend the reindeer (lovely!) or they have veggie and vegan options.

On our very first night, we heard the ship’s alarm sound, which means there’s a sighting of the Northern Lights!
Very excited, and wrapped up warm (it was -6°C and windy outside!), we ventured out on deck.
Looking up there was incredible activity in the sky above us – an absolutely dazzling display! I always thought it would just be green (like you see in photos) but we saw pink, white and yellow bouncing around as well. It’s like the sky is dancing!
We stayed on deck, under the spectacle, for around an hour with crew members serving hot chocolate, and gas heaters helping us stay warm.

Day 2 – The Beauty Of Borders

Today we made a 3 mile hike to the Pasvik River – the soft border between Russia and Norway – in around 2 feet of snow! We had two guides, and one unbelievably cute husky dog, named Odin. It’s a natural beauty spot, but there’s an eerie silence as only animals and water can pass through the marked no man’s land. There are border cameras all over this area and you cannot stray into Russia without serious consequences. Brown bear, snow hare and snow fox are apparently all in the area, but all we saw was a ‘great tit’! 😂 The guides are amazing with in-depth knowledge and a real passion for their work.

Another long hike for me (these are of course optional, but I could not say no!) around wonderful Hammerfest. This is one of the larger towns along the coastal journey, and well worth a visit. The people are so friendly and welcoming. The snow covered houses make you think of Christmas card scenes, and looks like a place the Grinch would live!
This area was heavily bombed in the second world war and 90% of the buildings were destroyed, hence houses are modern looking, and built all in a similar style with underfloor heating powered by sea water!!
During our journey of three nights we visited 22 different ports – some for 30 minutes, some for 4 hours. Hurtigruten has it all down to a fine art, offering a range of excursions departing from one port and returning to the ship at another port. You have to remember that it is a working ship, and that, in addition to us adventure-seekers and sightseers, the ship also carries cargo, post and produce along Norway’s coast. This does not detract from the fantastic public areas onboard for sight seeing and the venues offering fine dining.

Day 4 – Snow Angels Of The North

This morning we left the ship for the final time, in Honningsvag. A 1hr journey (I didn’t hike this one!) took us to the North Cape – the northernmost point in Europe. Our experienced guide chatted along the way about Norwegian history and the Sami people – the indigenous people of the north, and who have lived peacefully in this area for hundreds of years.
The North Cape feels like a scene from a Star Wars movie… standing at the amazing, majestic iron globe – which symbolises this unique view point – it’s  truly breathtaking and you feel like you’re on the edge of the world.  You’re surrounded by white snow, clear skies and a surreal calm which only comes with magnificent landscapes such as this.
Plus, we had loads of fresh snow to make snow angels in!
Our final night was spent in Tromso, at the Clarion Edge Hotel. This lovely hotel seems like it’s been plucked right out of an IKEA catalogue! Tromso has a two cathedrals – Tromso Cathedral and the iconic Arctic Cathedral. We visited the incredible Arctic Cathedral, which is open to everyone, and attended a midnight concert where we heard the angelic voices of the local choir. A lovely finale to our short, yet unforgettable trip.

I’m sure my photos do not do this journey justice… It’s certainly an experience, probably once in a lifetime.
I’d say most people onboard our sailing were 50 to 70 years old, but I wholeheartedly believe if you’re looking for something different, breathtaking, inspiring, unearthly natural phenomenons (no matter your age) Norway has it!
– October 2019 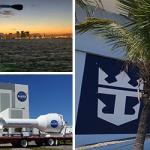 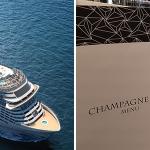